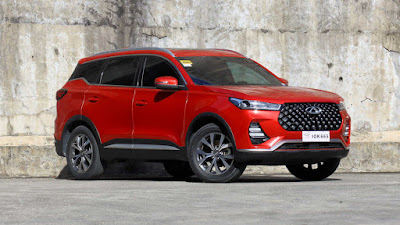 This compact SUV costs just P 1.198-million. That caught your attention, didn’t it? By pricing it in that bracket, Chery Auto Philippines might have just unleashed a game-changer.

First, let’s backtrack a bit. In 2019, the Chinese brand came back with a line-up comprised of five SUVs and one EV, with one of them being the Tiggo 7. It was a 5-seater compact SUV that was, depending on who you ask, head-turning or weird. Whichever camp you belonged to, it was saddled by a so-so list of features combined with a price that’s too precariously close to its larger, better-valued sibling, the Tiggo 8. Suffice to say, it didn’t sell in big numbers with the Tiggo 2, Tiggo 8, and Tiggo 5X all outselling it last year.

This brings us to the 2021 Tiggo 7 Pro. Instead of just offering one variant as they did before, Chery has now expanded the line-up to two with the Tiggo 7 Comfort becoming the entry-level variant, and the Pro now their top-of-the-line trim.
So, what’s new? Well, how about everything.
For starters, there’s the way the Tiggo 7 Pro looks. There’s not a line wrong here. Compared to the love-it-or-hate-it previous Tiggo 7, the Tiggo 7 Pro is absolutely stunning. It’s strongly chiseled, well-proportioned, and modern from every angle. In this particular bright shade of red, it’s caused more than one person to do a double-take, and that’s coming from neighbors who’re used to seeing a new car each week at our garage. Indeed, if it was Chery’s intention to start a conversation on how far they’ve come, then it’s job done at this point.

The same thing can be said about the interior. Taking learnings from the bigger, more luxurious Tiggo 8, the Tiggo 7 Pro now features a similar layout. For the most part, it can stand toe-to-toe with more established makes in terms of fit and finish. Sure, there are still some less-than-stellar bits (the wiper stalks and window switches to name two), but for the most part, it passes muster. A floating 10.25-inch touchscreen dominates the middle part of the dash, surrounded by a soft topper, and a minimalist look that’s, dare we say it, very Mazda-like. Piano key-style toggle switches serve as the physical buttons to the infotainment system, while a rising touch-sensitive panel adjusts the climate. Full LCD instrumentation as well as an electric shift lever and parking brake give a truly futuristic feel.
For buyers who’re attracted to tech, the Tiggo 7 Pro ticks all those boxes. Features include a 1.1-square meter panoramic sunroof, Apple CarPlay, wireless device charging, customizable ambient interior lighting, full climate control with N95-level filtration, front and rear parking sensors, a 360-degree camera, and a power tailgate. In short, it’s now one of the best equipped compact SUVs in the market.

Meanwhile, for those who’re into the mechanical, it’s time to talk about what’s underneath. Underpinning the Tiggo 7 Pro is Chery Auto’s T1X platform. Not only is it made of 60 percent high-strength steel, but it incorporates both longitudinal and transverse reinforcement beams. They’re not shy in saying that they’ve benchmarked Japanese SUVs in seven critical areas, matching them in six including body control, handling, and even mid- to high-speed comfort. Even more impressive, the platform focuses on liberating interior room—something that this SUV has in spades.
Getting comfy behind the Tiggo 7 Pro is easy. The driver’s seat offers movement (powered, naturally) in six directions, and the steering column is adjustable for both reach and height. The seats themselves are generously bolstered, and promote a relaxed driving position. All the controls fall within easy reach, and the thick leather-wrapped tiller is a joy to hold.

As a whole, the Tiggo 7 can’t be faulted but there are some minor quirks. First, the position of the A-pillar and the thick side mirror housing results in blind spots, especially when trying to spot motorcycles or bicycles when merging in traffic. Second, the electronic shifter can get confusing. Chery should have taken a page off BMW’s book where drivers can quickly shift from Park to Drive or Reverse in just one action. As it is, drivers will need to tap down twice for drive and twice up for reverse. It’s a set-up we’ve seen before in Volvos, and frankly, we’re not a big fan.
Those issues aside, the rest of the Tiggo 7 mechanical package impresses. Providing thrust is a 1.5-liter turbocharged 4-cylinder engine with 145 horsepower and 230 Nm of torque. The numbers surely aren’t big, but at least it’s refined. A driver-selectable toggle changes the feel of the throttle, engine, and steering, but the default Eco is far too neutered. It’s best to stick to Sport for the “just right” feel.

Compared to the Tiggo 7 Comfort which had a dual clutch, this one uses a steel-belted CVT. The tuning clearly prioritizes to keep the revs as low as possible to maximize fuel efficiency, so gunning it would result in a not-so-smooth experience. Alas, even when driven sensibly, the resulting fuel economy figure is 8 km/L (based on the computer), a figure that’s pretty much close to the Tiggo 7 Comfort.
While not cut from the sporty cloth, it’s perfect as a daily driver. The NVH is outstanding, with the interior keeping powertrain noise to the barest minimum thanks to the application of thick sound absorbing material. And then, there’s the ultra-stiff platform itself. The robust construction means that despite the large glass on the Tiggo 7 Pro’s roof, it feels solid. Moreover, it makes quick work of Manila’s potholes—both big and small. Oh, and this also enables Chery to fit a softer suspension making the ride cushy, but without any noticeable bottoming out.

If “Pro” means “Progressive” then, the Tiggo 7 Pro lives up to its name. Sure, there are small kinks that still need to be ironed out (every car has those), but as a whole, it’s managed to push the goal post for other Chinese compact SUVs to follow. For fear of sounding like a broken record, it’s amazing to see how far Chery’s gone in the past 20 years or so. Taking into consideration its design, specs, dynamics, price, and even its warranty, their latest effort is clearly their best and most convincing one yet.