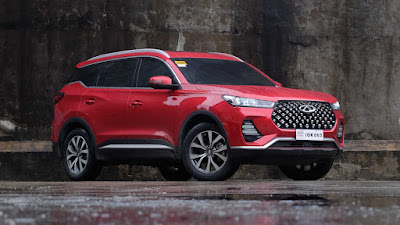 Under the United Asia Auto Group, Inc., Chery Auto just celebrated its first anniversary in the Philippines. In just 365 days, the carmaker has managed to cement themselves as the “Rookie of the Year,” launching five models (including a full EV), offering a remarkable one-million-kilometer powertrain warranty, and opening 15 dealerships. As 2021 approaches, they’re now shifting gears. From brand-building, they’re now serious about competing on the mainstage. The one leading the charge? The 2021 Chery Tiggo 7 Pro.

Having had its global debut early this year, the Tiggo 7 Pro is representative of the newest and latest that Chery Auto has to offer. It takes on their new design direction—shifting from the “bionic” to the “aesthetic.” With that, it stands all confident. The front is dominated by the “Sunshine Galaxy” grille, sandwiched by matrix LED headlights that provide 2.7 times the illumination of a traditional halogen headlight. Eschewing front fog lamps, designers moved the LED DRLs to the lower part of the front fascia. To the side, it gets a “floating roof” motif thanks to the D-pillar hidden in a pane of glass, and at each corner are 18-inch alloy wheels. At the back, the darkened taillight cluster not only matches the subtle body crease, but also illuminates to cover almost the entire width of the rear end.

Underpinning the Tiggo 7 Pro is Chery Auto’s T1X platform—a modular platform designed with the help of Jaguar Land Rover—the company’s joint-venture partner in China. Not only is it made of 60 percent high-strength steel, it incorporates both longitudinal and transverse reinforcement beams. They’re not shy in saying that they’ve benchmarked Japanese SUVs in seven critical areas, matching them in six including body control, handling, and even mid- to high-speed comfort. Even more impressive, the platform focuses on liberating available interior room—something that this compact SUV has in spades.
Despite a compact 4,500 mm overall length and a 2,670 mm wheelbase, the Tiggo 7 Pro delivers on the promise of space; the rear seats, in particular offer 958 mm of legroom—one of the largest among compact SUVs. The driver and front passenger are treated to a soft-topped dash with double-stitched trim, seats that are comfortable thanks to generous bolstering, and a 10.25-inch capacitive touchscreen with Apple CarPlay and MirrorLink that stands in the middle. The driver is treated further to 6-way power adjustment that goes together with the tilt/telescopic steering adjustment, electronic gear shifter, and electronic parking braking with auto hold.

Other features found in the Tiggo 7 Pro include a 1.1-square meter panoramic sunroof, wireless device charging, customizable ambient interior lighting, electronic control air conditioning with N95-level filtration, 360-degree camera, front and rear parking sensors, and a power tailgate.
The sporty exterior and high-tech feel of the cabin are preambles to the Tiggo 7’s on-road dynamics. A full review will have to wait closer to its official launch, but initial impressions are positive. Powering it is a new 1.5-liter turbocharged 4-cylinder engine with 145 horsepower and 230 Nm of torque. While the numbers are not big, Chery Auto is quick to point out that they’ve instead focused on improving fuel efficiency and long-term durability—qualities that are important to the regular consumer. Mated to the engine is a steel-belted 9-speed CVT (with cruise control) which they compare to an Aisin 6-speed automatic in terms of response and efficiency. All in all, it contributes to a 7 percent improvement in fuel efficiency.

The Tiggo 7 Pro may not rocket off the line the same way as other compact SUVs, but what is outstanding is its level of quietness. Using thicker sound absorbing areas applied to more than 20 areas of the SUV, its idling noise stands at just 35 dB—the same as a whisper. Remarkably, even at full throttle, it’s just as refined. Power delivery is smooth with the gearbox adjusting its ratios to keep the revs as low as possible. For drivers who prefer some degree of customization, there’s also a drive mode selector which is tied not just to the throttle, but to the engine and even steering as well. As expected, the default Eco mode neuters the responses somewhat, making Sport feel just right.
Despite the slick design and availability of a Sport mode, the Tiggo 7 Pro is most relaxed as a cruiser. Keep things sensible from behind the wheel and it’s cushy. Combined with its quiet cabin, it makes quick work of Metro Manila busy streets. Potholes and road cracks are easily quelled. Overall, the handling is tidy, but it does tend of exhibit a bit more body roll when pushed.

After shocking the industry with their first-year push, the momentum is still on Chery Auto Philippines’s side. With an official launch date slated for this January and an SRP in the P 1.2-million range, the Tiggo 7 Pro has what it takes to stand out of an increasingly crowded compact SUV segment dominated with a dozen or so choices. It’s also a reminder of how far Chinese carmakers have progressed in the past 20 years or so.